It was one sunny noon; they had planned with much vigor to visit the waterfalls. The girls said to each other, “today, we’d go much deeper, we’d leave the shallow part of the water”. They teased each other on who would last longer under. They had been practising for a week, the guys helped them through. They learned to kick their feet and stay atop without drowning. No one noticed Kamara, quite a subtle and shy one among them. It must have taken a lot for her to pick up her swimming trunk and toss it into her bag in the first place.

While the girls talked about their past swimming lessons, she laughed along knowing deep within that she hadn’t learnt the pros and cons of kicking her feet under water and maintaining a balance. She peered through the window of the car perhaps wishing for something that could stop the trip. She however braced up as they got close to the falls, “what could really go wrong”, she thought.

They got changed and approached the aura of their excitement, the falls. The guys went in first, a show of how good they were at diving into the water. Each girl stepped in, they had all gotten used to the warmth of the water on their skin. Kamara stepped in too.

They splashed water on each other, she wished they had forgotten the reason they came. The other girls didn’t for sure; they wanted to try the deeper part of the water. Kamara moved on with much faith, “nothing would go wrong, they’d laugh at her for not being a fast learner”, she thought.

They took a count in a sequence, 10, 20, 30… She also came over to join them after watching for a few seconds. She joined them while they were still on the count, maybe she’d catch on without being noticed. 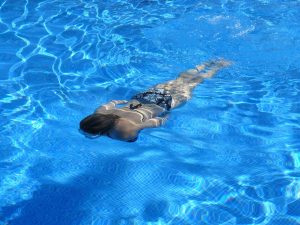 With her own count of 10, wishing for it to end, while they were at 40, she took a deep breath. She held on for a while but began to struggle. She found a strange feeling grip her, she feared she’d drown. Just then she started to sink in on no one’s notice. She thought while drowning if someone would just look around for her, had they not finished their count down?

She sunk so deep that the lower bed didn’t look too far anymore. Then the flow of will power for her life took over as she struggled to push herself up and against the force pulling her down. She felt lucky as she saw one of the guys swimming by. She pushed quickly to grasp his leg. They all felt she had taken a walk, they had assumed her fear of not going deep when she didn’t start the count.

As she pushed, she got a hold of his briefs or so she thought, it was a struggle for life. Ahmed, her friend thought a fish had gotten a hold of his genitals. As he tried to go deeper to at least get a better hold of the fish on his genitals, he found that the fish itself was Kamara’s hand. She had taken in a lot of water, all she remembered were their voices trying to bring her back. Their faces looked hazy as they tried to push the water out of her.

She woke up on her bed in the hostel; they were all having fun while she rested. She could feel the bubbles in her ears and her eyes had that peppery feeling when you opened your eyes wide in water. It lasted three (3) days.

IJMB days in the University of Jos, the falls, an unforgettable place for Kamara, she sunk in with guilt each time she saw Ahmed. Though he took it as a simple incident, her pleas were endless till she left Plateau state.

Now the lesson, never swim again or speak up your fears? Admitting your fears and facing them shows how much courage you have got in you. They all knew after all that she couldn’t go deeper, it never hurts to speak up.

Courtesy of the story—you know who you are *wink*