It happened during the season when lilies bloom- the casting of gloomy shadows over our once blissful lives. Mum became a widow before the twilight of her days, and I, I knew the language, pain, spoke just when the morning of love began to dawn on me.

Mum used to plant flowers in the compound. “The language of God”, that was what she called them. Of all the flowers she used to plant, mum loved lilies the most. She said, every flower has its own language, that lilies spoke of beauty, and that true beauty is loving everyone without minding our differences. 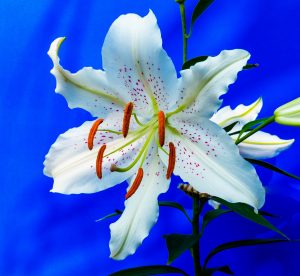 That was before the riot, not anymore. The riot took Dad and Pius, then mum became withdrawn all to herself. She’d sit alone and stare into the space not blinking her eyes, like one enrapt in the vision of a future; perhaps, the future I want, where there would be no killing between Christians and Muslims. A future in which I wouldn’t lose anyone again because we are Christians.

I woke up today and lilies filled the air- the scent. The sun spied through the window, it beamed on mum’s face. I walked over to her bed to cover her with the blanket, her face glowed like one kissed by the moonlight. It looked younger than it was yesterday. The wrinkles on it were gone, the smile she wore on her wedding picture was on her lips, an ambience surrounded her. She looked like herself today, beautiful, for the first time after Dad and Pius were buried.

I’m fondling her necklace now, I had removed it from her neck this morning before she was buried.