Mama noticed and started questioning me, I said it was the bursar’s mistake, that I was the first person in his office so, he probably forgot. My claims did not move her staring eyes so I tried another one, I explained that a Good Samaritan borrowed me and I had already given him the money. My mother began to shake her head with tears pouring down her eyes; she looked me in the eye and said, ‘Tosin you are lying, if you continue like this it will put you in trouble, I didn’t raise you like this’. My courage to lie grew even stronger, I said ‘mummy, I can’t lie to you’, I also started crying. I didn’t realize her countenance change to anger, ‘keep shut!’ She shouted, ‘that shop has been mine even before you were born, shouldn’t I know it more than you do? The machine is also mine, my purple thread finished last two weeks, only for me to see a new and distinct type packed with the rest of my materials, even with my failing eye sight I could still see bits of thread on your cloth, I saw you packing those clothes to go and give to that lady, Tosin! Why?’ I cleaned my eyes and looked at her with shaking courage in my eyes, ‘maami je kiiro pa mi , let lies kill me, shey it is the money you want, this is it! Imagine this money did not come what would I have done, I’ll be waiting on your policies’, that was what I told my own mother o. Maybe I wasn’t smart as many children/youths/ Men and women would say. I was about saying excuse me when those words came at me, ‘don’t forget what Proverbs 12:18 says, ‘There is he that speaketh like the piercings of a sword but the tongue of the wise is health, ah! Ahon ologbon, ilera ni ’, she said after refraining a slap from getting to my face. I wanted to beg her but since I didn’t know how as my pride blocked my knowledge, I stormed into my room instead.”

I could sense the uneasiness of the audience, I braved it however and continued. “Mama was never one to give an attitude no matter what I did and I was also a quick one to beg for forgiveness but it was hard this time for me. I had to wake up early and brush my way out, the routine made me feel I wasn’t at fault with time, I wanted her to come and meet me, moreover she was an elder, I thought. I abandoned the food she kept for me and was still a big girl spending the change I made. When the money ran out, I remembered my mother. I didn’t know how to beg her so I solicited with some of my friends to do so with and practically for me. We all knelt down but mama said she had forgiven me a long time ago. She explained and in her own words said, ‘man shall not live by bread alone but by every word that proceeds from the mouth of God, we need to flee from every appearance of evil, both those who sew for the mad and the mad, what makes their thoughts different? She queried’ those words made my friends laugh but deep within me, I didn’t want to go over the issue again, my hunger brought me back home. We settled it but I still had more under my sleeves.

Few days after, while coming back from school in which Sade’s house was the undeniable route home, I met her and her friends, they looked like they just arrived from an occasion, and she in fact wore the almighty purple French lace. I bent my head downwards with effect so they wouldn’t notice me and still do but why wouldn’t they? when they were talking about the gown and the designer was walking past them. She halted my forward march as I immediately heard, ‘hey! omoiyarugbo wa jare’, I gave an about turn, a slow one. She really praised my work so much that my head began to swell- how many men that had asked for her number, how many magazines wanted her pictures taken for a catalogue. Her friends folded their arms and looked at me from head to toe calling me small but mighty. I really wanted to go home fast but before I could take my leave, her friends said they want theirs done too, I immediately shouted, ‘Ah! Maami will not allow me o, it’s her machine and I don’t want wahala ’. Sade quickly re-ignited my hope, she said, ‘it’s because you are a better tailor, your mother is jealous, come to my house tomorrow, I’ll see what I can do for you’. I gladly ran home, anticipating the next day. 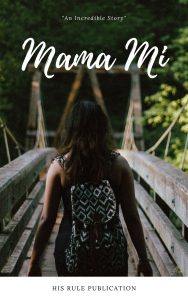 My thoughts through the night that even manifested into a dream was how my own shop would be bigger than that of my mother, how many tailors I’d employ, how I’d be a big madam that would drive big cars, I just couldn’t wait for morning to come. I couldn’t realize how fast I was losing it all.  I finished off all that I needed to do in school and didn’t even wait for lessons so I could meet Sade.

She lived in a duplex, the inside of the house was richly furnished, my own house was no match for it, and in fact the cracked paint on our wall disqualified it a long time ago. I stared at her pictures at how she changed from black to what we call ‘coke and fanta’ skin color as she went in to get me a drink. I quickly got comfortable on her sofa admiring its richness; she came in and went straight to business. She explained that she would buy me a machine and I’d have to come and sew it in her house, she added that she would take the money out of my payment but I won’t feel it she even asked if I could handle #100,000, I quickly replied yes and was jumping like a baby that had been given a favorite toy. She didn’t tell me, I personally told her I’d start the next day.

I grew smarter this time; I would so dust my clothes even after tying a lappa so the pieces of thread wouldn’t stick to my clothes. My mother didn’t suspect a thing until I was able to buy a phone; my mother’s Nokia had the battery bound to it by two rubber bands. She felt I had a boyfriend as was the norm of girls my age but each time with the support from my friends I’d explain that it was gifted to me until she couldn’t swallow my morsel of lies again.

She sat me down one faithful day and started questioning me but as my nick name in school had grown to be ice cream, I fed many scoops into her mouth forgetting that she was after all my mother. She didn’t believe me, her anger had risen beyond measure that she landed a slap on my face even with tears in her eyes, crying and asking repeatedly, ‘Tosin, where did I do it wrongly, won’t you tell me?’ I just started stamping my feet on the ground and looking at her scornfully, I vomited my words spitefully at her, my words-I’ll tell you. I shouted back asking her why she was mounting so much pressure on me, I asked her why she didn’t want me to progress in life, I even quoted that ‘the latter house shall be greater than the former’, I told her clearly, ‘mummy, I’ll be greater than you even if you don’t want it to be so, mummy I’m more than #50,000 richer than you’. My mother wept even more and  amidst her tears said, ‘ Odo to gbagbeorisun re , a gbe, the river that forgets its source would dry up’.

I was unrepentant and waved the words away as I left the house straight to Aunty Sade’s house. I banged on her door for quite a long while until she came out all dressed and stunned to see me at her door step as it was very late. She didn’t look comfortable seeing me while I wore a dragged smile that was pleading acceptance.

I guess you’re wondering what’s broken. Truth is, we all are. In some ways, we were broken, in other ways we were crushed. Most times…

Sex is desirable even by people who have never delved into it. The mere mention of it even in religious gatherings sparks a flame of…

ONE A Birthday is a day meant to celebrate the birth of a person. Parents are happy that their wards are alive and kicking well.…

FEELINGS How well do you know me? I have no strength But I want it all I have no knowledge But all I do is…

Do you really Care? Arm’s length is too close The pose is beyond a meter Everyone is a suspect Expect no open affection Except of…