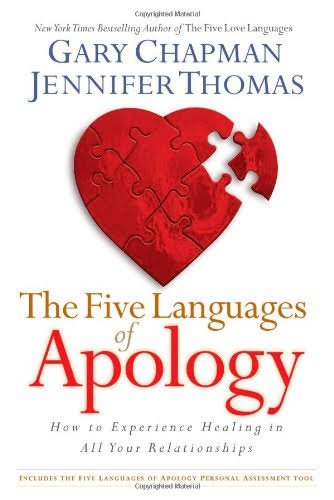 The book is authored by Gary Chapman, New York Times best selling author of The Five Love Languages, in conjunction with Psychologist, Jennifer Thomas. They both come together to unveil the art of apologizing and doing so correctly.

• Expressing Regret: To people with this apology language, “I’m sorry” cannot be taken for granted. An apology without these words is incomplete.

• Accepting Responsibility: For people with this apology language, seeking for forgiveness means acknowledging that your behavior was wrong and admitting to the mistake made.

• Making Restitution: This language involves making things right once again either by replacing what has been broken or correcting the wrong impression that has been made. People with this apology language expect you to ask for ways to fix the situation. The author also shows how the five love languages respond effectively with this apology language.

• Genuinely Repenting: One statement you don’t want to miss while apologizing to someone with this apology language is admitting you are willing to change and committing to it by asking for ways to repent based on the action. The authors outline different ways you can commit to genuinely repenting to amend the relationship.

• Requesting forgiveness: People with this apology language wish for you to request for their forgiveness when you have offended them. This shows the sincerity in the apology.

Their research shows and proves that we don’t all agree with one specific form of apology and to effectively communicate with people in a world where offence is inevitable we must be able to speak the apology language of the person we are apologizing to.

The authors also illustrate how the apology languages can be employed in the family setting and work place. They explain that children can also be taught the apology languages with outlined methods from teaching them how to accept responsibility for their little mistakes (for instance, using the statement “it broke” to “I broke it”) to knowing how their actions affect others.

Indeed this is a step further to healing relationships in all spheres of life.